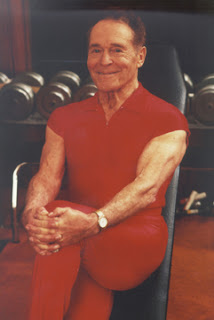 Jack LaLanne swears by juicing so much that he's got his own juicer on the market. There's also Jay Kordich aka the Juiceman, who has spent his lifetime promoting juicing of raw fruits and vegetables as a health necessity.

Of course, there are skeptics. They argue things like you get too much sugar, too rapidly, from juicing. They argue that there's a reason to chew, it's healthy to do so. Things like that.

However, juicing proponents are not arguing that juicing should substitute for eating foods (as opposed to drinking them). They are encouraging juicing as an addition to the diet, usually to increase intake of foods otherwise avoided or eaten rarely, or to combat specific maladies. Juicing gets more fruits and vegetables into the daily diet, as well as optimizing certain nutrients that fight against certain maladies (e.g., cabbage helps heal ulcers in part due to its high percentage of vitamin U).

At HPS Health, there are lists of recipes for juices (combinations of raw fruits and vegetables with some fresh herbs) to address specific ailments such as headache, anemia, fatigue, and gastric ulcers. Other recipe sites include ones promoting delicious taste (this one has a V8 recipe) and those that have, well, interesting combos.

And, for the skeptics, there's a site that gives recipes as well as advice on choosing a juicer. The site? The Stanford Cancer Center, part of the Stanford University Medical System.

According to Stanford, "The best selection of juices comes in nature’s own containers: fresh fruits & vegetables. Fresh juice is loaded with cancer-fighting phytochemicals and vitamins, in a state easily absorbed by the body."

Choosing a juicer is the next step. Short answer: get the highest powered motor you can afford, and make sure the components are easy to clean. Juicing is a messy job.

Great stuff. I am linking to this post on my own blog. Thanks for the hard work.
Http://www.healthwithcancer.blogspot.com