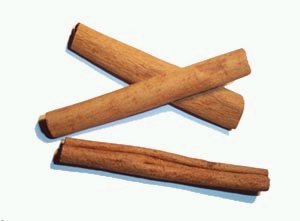 Cinnamon taken daily (2t either in pills or added to food) may prevent or inhibit diabetes because it increases the body's efficiency in metabolizing glucose twentyfold - yes, that's 20-fold. It is also very effective with the metabolizing of cholesterol, as it removes free radicals from the blood, which act to damage the vessels, and also assists small blood vessels in their performance.

Cinnamon acts as an anti-inflamatory and an anti-microbial agent that is especially effective against Candida. Just smelling the stuff helps brain function.

"A study published in the February 2004 issue of Hormone Metabolism Research showed that when rats fed a high-fructose diet were also given cinnamon extract, their ability to respond to and utilize glucose (blood sugar) was improved so much that it was the same as that of rats on a normal (control) diet. Cinnamon is so powerful an antioxidant that, when compared to six other antioxidant spices (anise, ginger, licorice, mint, nutmeg and vanilla) and the chemical food preservatives (BHA (butylated hydroxyanisole), BHT (butylated hydroxytoluene), and propyl gallate), cinnamon prevented oxidation more effectively than all the other spices (except mint) and the chemical antioxidants. (May 6, 2004)."