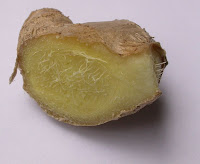 I'm still drinking my homemade Ginger Tea - and it's still proving to be very effective as a pain reliever. Once again this weekend, I skipped it and my foot (tendon injury) woke me up with a sharp pain on Saturday night as I tried to move it against the sheets. Yesterday and today, I'm drinking my Ginger Tea and no pain. Just like I'm taking a pain pill - but I'm not.

For those of you that might like to try my Ginger Tea recipe for yourself, here it is:

Get yourself one big, fat hand of fresh organic Ginger Root.  Fat fingers, because you will want lots of meat left after you take off the bark.  Cut away the bark, and then cube the flesh of the root - maximizing the surface area that will be exposed to the water as it brews.

Boil yourself a big tea kettle of water and then brew (I use a cute tea pot that reminds me of the English countryside) three organic green tea bags together with the cubed fresh ginger.  Let it steep a long time.  Me, I let it go several hours because I want all that ginger to free itself into the liquid.

Grab a pitcher that has a cover/lid.  Blend your steeped ginger/green tea with cold water in the pitcher, stevia to sweeten it to your taste.  Use all the steeped ginger from the teapot, or if it's too strong for you, then save some in a glass jar in the fridge -  a handy second batch when you're ready.

I think the green tea helps with the flavor, as does the stevia.  Plus, they both are helpful in their own right (antioxidants, etc.) and that can't hurt when you're healing.

For those of you interested in learning more about Ginger as a natural alternative to aspirin, ibuprofen, or naproxen, check out these sites:

University of Maryland Medical Center
(where the med school reports that ginger is "commonly" recommended for nausea and vomiting caused by motion sickness, pregnancy, and chemotherapy, as well as a "digestive aid for mild stomach upset," (whatever that means) and as a help for "inflammatory conditions such as arthritis" along with heart disease or cancer.

Consumer Affairs
The consumer site references studies published in the Journal of Pain (as well as research done by several American universities), where ginger is recognized as a pain reliever in either its raw or heat-treated forms.  It also points to ginger as being a big pain remedy in Chinese medicine, and reports that ginger has both anti-inflammatory and analgesic properties similar to non steroidal anti-inflammatory drugs.