Those Funny Light Bulbs - Are CFL Bulbs Worth the Price? 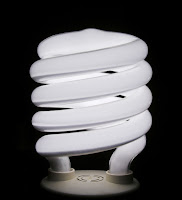 You've seen those strange light bulbs at the store - they aren't the normal round light bulb; instead, they're a glass coil - and they cost a lot more than the standard bulb (about three times as much). Officially, they're called "CFL" bulbs, which stands for "compact flourescent light," and they tout themselves as being better for the environment and cheaper on your pocketbook.

Personally, I had walked on by those CFL displays at the grocery, because they did cost so much more than the regular bulbs and I couldn't believe that changing out a couple of bulbs could make that big of a difference.

Could be, I was wrong.

Several folk have reported on the web that they've cut their electric bill in half by replacing the bulbs in their home with CFL bulbs. That's right: HALF.

How can this be? Well, it seems that CFLs do not use heat to make light, and a 13 watt CFL will give you the same results as a standard 60 watt bulb. Less watts mean less cost. The more bulbs you replace, the more savings you'll see.

It's recommended that you begin the transition by changing out the bulbs in your high-use areas: the kitchen, the den, the bedroom - you'll begin to see the biggest difference on your electric bill with these changes, and you can avoid the immediate outlay for enough CFL bulbs to replace every bulb in the house.

There is a hitch, though. Seems these CFLs contain mercury. When they burn out (which takes a lot longer than the standard bulb -- a CFL purportedly lasts 10 times as long as a standard incandescent bulb), you need to dispose of them properly. Don't let that mercury get hauled with the rest of the trash, over to the landfill. Call 1-800-CLEANUP for info.