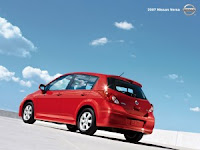 Nissan has cut back on the cloth seats and the chrome along with making its 4 cylinder engine a tad smaller, and put its new 2009 Versa into the marketplace this month for a price tag of $9990.00.

The 2009 Nissan Versa claims to give you 34 mpg on the highway, and when it debuts on November 19th, you can pick one up at the dealer for zero percent (0%) interest.