How to Buy Gold - Should You Prepare for an Economic Collapse, Like Mike Pitts Foresees? 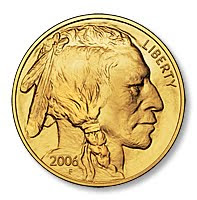 South Carolina Representative Mike Pitts has made the national news this week with his introduction of a proposed law to that state's legislature that gold and silver coins replace the Federal Reserve Notes we all use for cash within his fair state as its legal currency.   It seems Representative Pitts fears that those dollar bills are too risky - that if the federal government were to collapse, then they would be worthless paper.

It's happened before.  It happened in Germany after World War I (they were printing money like crazy, it became worthless).  It happened in the American South after the Confederacy lost the War Between the States.  The Civil War victory by the North mean all those confederate dollars were worthless.

So, what if you're fearful -- or maybe feeling that the prudent thing to do would be to buy some gold (or silver)?  Maybe you think that investing in gold (or silver) just seems like a good idea in these uncertain times, but you're not sure what to do.  How do you do it? There's not exactly a gold section at the grocery store (yet).

Here's what I've learned about how to buy gold:

1.  buy coins, not jewelry.  Coins are more liquid, they're easier to use as currency -- because they ARE.

2.  buy the American Buffalo Gold coin because it is labelled with the federal mint's guarantee that it is pure 24 carat gold (the American Eagle coin, for example, is not pure gold -- it also contains other stuff).

Today, you could buy a single American Buffalo gold coin from NW Territorial Mint for $1303.17.  It weighs 1 ounce and is .9999 pure gold.  They also sell nice charms and necklaces so these can be incorporated into jewelry pieces.  The US Mint site had the same coin for $1360.00, the "collector's edition," which brings the coin to you in a nice hardwood box.

It's recommended that you never buy gold that is over 7% the "spot price of gold."  Otherwise known as the cash price.

4. buy from a reputable dealer.  There are some shady characters out there, and it's wise to buy your gold from someone who's been in the business at least 10 years, and make sure your seller buys his product from wholesalers supplied directly by the U.S. Mint.  Check for membership in either the Professional Numismatists Guild (PNG) or American Numismatic Association (ANA).  You prefer a PNG member but if there's not one in your area, then go with a member of ANA.  Buy in person, and get references on the dealer as well as visiting his shop and talking with him before you start doing business.  Trust your gut.

5. have a plan in advance on where you're going to keep your gold coins.  The safety deposit box you have down at the bank isn't the perfect haven for coins or other currency -- you're not covered by the FDIC policy for any losses from someone stealing from your safety deposit box.  (And this isn't just bandits wearing hooded masks, more often these losses happen when someone legally accesses a safety deposit box as a signatory on a power of attorney and falls prey to the temptation to swipe stuff.)
by Unknown 1 comment:
Email ThisBlogThis!Share to TwitterShare to FacebookShare to Pinterest
Labels: gold, Surviving the Depression
Newer Posts Older Posts Home
Subscribe to: Posts (Atom)