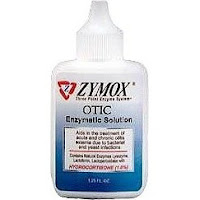 Your dog starts shaking his head roughly, ears flapping about. He rubs his head on the ground, the rug, or the bed. He's irritable. His ears smell and there's something black or yellow in there.

He's got an ear infection.

And, lots of you know the experience of taking him to the vet, getting the pills and the ointment, and having the same infection pop right back up the minute that you stop the treatment. And, some of you know the frustration of paying close to $1000 to have your pup anesthesitized and his ears cleaned out. Not a cure, either.

Well, here's something that's worked for us. And apparently, for lots of other folk, given the 53 Five Star Reviews at Amazon.Com (along with 2 four star reviews). It's Zymonx Otic With 1.0% Hydrocortizone, and you can get a bottle for under $10 at Amazon.Com.

I'd recommend getting two, because it's sloppy work and one bottle may not be enough for an uncooperative Fido when it comes to putting the drops into the ears ....