It's been a long, long time since I chose to live a simple life -- I started this blog as a part of that process, back in January 2006.  It's amazing to realize this blog is almost 11 years old.

Your life is your life.  You only get one.  YOLO, right?  With your free will, you make choices that have consequences.  Not choosing is still making a choice.

So I chose to live a voluntary simplicity lifestyle.  What that means, to me at least, is all over this blog.


I'm proud I had the courage to choose the path less traveled way back when. As a lawyer, choosing to live a life of simplicity back in the mid-2000's was not understood by lots of folk.  To many, I was nuts.

I don't know how much that's changed or how much I've just stopped worrying about the approval of others. 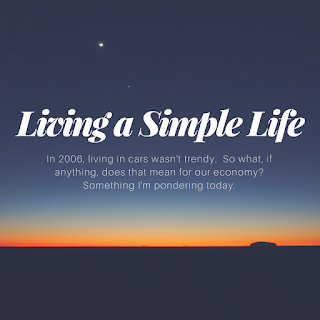 The Economy Around Me

Then I stopped blogging about it.  Truth be told, I got busy with other things and just didn't post very much.

But this fall, I decided maybe I should blog again.  Blog some.  Blog more often.  And so I began, even though participating in National Novel Writing Month sideswiped some of that blogging schedule in the past few weeks.


All this meandering to get to here.  My point.

What the heck is going on here?  I know Preppers.  Heck, there are some of my Fancy Friends who think I'm a Prepper.  They worry because I don't know the trends and don't like credit cards.

Then the Preppers worry that I'm not doing what I need to do in order to survive the impending economic explosion.  I'm not working each week on implementing a Survival Plan.  I don't know how to can food.

But back when I began on this road, I don't think there were that many folk living in their cars.  And I mean cars or vans, not RVs or Travel Trailers.  That's the subject of another post for a different day.

I have used YouTube quite a bit this past couple of months to research my NaNoWriMo thriller, and in the midst of all that video surfing, I have discovered a great many YouTubers chronicling their lives as they live in their vehicles.

Go look at the search results yourself in YouTube for "living in car."

It's amazing.  I'm seeing young women, brave and happy and apparently well-adjusted, choosing to live in their sedans or small SUVs because they've decided it's a great idea.

Some are doing this to pay off student loan debt ASAP.  Others have their own reasons.

Living in Your Car as a Simple Living Lifestyle Choice


This choice, just like any version of simple living, isn't a One Size Fits All.  Each story is unique, as is how each person approaches simplicity -- or minimalism, the term that's arisen since I started this blog.

Thing is: when I began looking around online, it's not all fun and games.  There are people living in their cars because they have no option.  They're more the homeless stereotype of the "van down by the river" and they aren't so happy or excited.

So, it's something I'm thinking about right now.  Times are changing.

How bad is our economy really? I don't know.  I'm thinking about this.  Back in May 2010 I wrote a post after reading a London Times article on the 'Great Depression of 2010."  I am thinking about that frog in the pot right now.

One thing I do know.  When I started simplifying, it was far from a trend to have folk living in their cars like they do today.

The continuum on simplicity existed but van-dwelling wasn't really on the charts back then.  It is now.  That is telling me something, I think.

See, "Living Out of a Van Is The New American Dream," written by David Jagneaux and published in Vice on February 5, 2016.

Here's a YouTuber video example for you:

Will all this pondering cause me to make changes in my lifestyle?  Will I go more prepper now?  Will I decide to get a vehicle that if necessary, I can live in comfortably?

What about expatriating?  It's these kinds of thoughts that lead me to prayer and the Bible and get me in the kitchen cooking up some sort of dish filled with melted cheese.