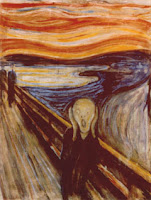 This morning, The Drudge Report has three links to news reports on unbelievable prices --

1. $150,000,000 for an apartment in New York City's Upper East Side. That's right - an apartment. Not even one tree is included in the purchase - you still gotta walk the dog. (Or, assumedly, have someone to do it.) One-hundred fifty MILLION, folks.

2. A $25,000 chocolate sundae being sold by New York's Serendipity 3, which includes La Madeline au Truffle from Knipschildt Chocolatier on the side ($2,600/lb.) as well as 5 grams of edible gold and a gold spoon encrusted with chocolate and white diamonds. And, yes, you get to take the spoon home with you.

3. A $1000 bagel at New York's Westin Hotel -- it comes with white truffle cream cheese (according to the article, only caviar is more rare than this stuff) and something that just sounds like it was written for comedians out there: "goji berry infused Riesling jelly with golden leaves."

No word on who has actually bought the sundae or the bagel. These are being offered for sale, the bagel's profits are going to charity.

But the apartment? That's a done deal, baby.
by Unknown No comments:
Email ThisBlogThis!Share to TwitterShare to FacebookShare to Pinterest
Labels: Example of Excess
Newer Posts Older Posts Home
Subscribe to: Posts (Atom)