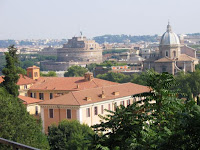 Living simply means living well -- living abundantly -- and a jewel of an example lies within the pages (or screens) of the New York Times, with its Frugal Traveler blog.

First, it's much simpler to read the New York Times online than it is to purchase the print version. Cheaper, easier on the trees.

Second, Matt Gross, the Frugal Traveler, really knows his stuff. Check out his current Grand Tour of Europe on a Budget -- he's covering Europe over 12 weeks this summer, and on a budget of less than 100 euros a day (or 156 dollars). His average daily total thus far has been $143.53 -- not the cheapest vacation for some simplifiers, but heck. It's EUROPE.

It's nice to read and daydream about ... travel can be done, and done well, on a budget. Even Europe. Even Rome.
by Unknown No comments:
Email ThisBlogThis!Share to TwitterShare to FacebookShare to Pinterest
Labels: Expatriates, Simple Inspiration, travel
Newer Posts Older Posts Home
Subscribe to: Posts (Atom)