Fear: How Scared Are Americans of the Economy These Days? Massa, Glenn Beck, the Survival Seed Company, and Lisa Scottoline 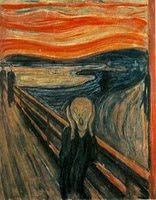 Yesterday, I veered from my usual day-in, day-out writing schedule and its corresponding mental whip of meeting my Word Count quota because a pal had let me know that Ex-Congressman Eric Massa was going to do two interviews, and the first would be on television that afternoon, on Fox's Glenn Beck show.

I waited for Massa to become a Congressional Whistleblower.  It didn't happen.

I rationalized this, work-wise, since one of my long-term projects is working with a book editor and an author on a whistleblower memoir (easiest way to describe it, "Enron-esque") and if Massa was going to jump onto a live TV show to be a Congressional Whistleblower on some mysterious corruption stuff, well - there was some sorta work correlation there.  Sorta.

Nothing much happened during this Hour of Massa, however, whistleblower-wise.  Beck looked as disappointed and frustrated as those Congressmen during the Michael Corleone hearings, where the brother from Italy appears in the room, sitting next to Michael and suddenly, the snitch knows noottthhhing.  Remember that?  Godfather II.  Great movie.

What got me during the show were the commercials.  Lots of gold sales, that's not new.  But for the first time, I saw an ad for SEEDS.  That's right.  Seeds, as in gardening.  And, they weren't promoting the seeds for the beauty of the fruit, or the nutrition of the vegetables, or the size of the blooms.  Nope.  They were trying to sell me these special seeds as BARTER.  Better barter than gold, in case of Doomsday here in the USA.   The company is the Survival Seed Bank, and when I surfed around about them this morning, I found that others are pondering this event, too.  Places like BoingBoing and Steve Pendlebury over at AOLNews.

Later, I'm Reading Lisa Scottoline's new book, Why My Third Husband Will Be a Dog, laughing away ....

Skip to evening.  Look, the truth is that most of my time is spent reading or writing, I'm such a dull girl, and last evening, I was reading through Lisa Scottoline's new book, Why My Third Husband Will Be A Dog.

This is one hilarious book - it's a collection of essays from Lisa Scottoline's "Chick Wit" column at the Philidelphia Inquirer.  Funny, funny stuff.  (Read or listen to some of this book here.)

And suddenly, Lisa S is writing about going to a website -- she provides the reader with its address in the book, it's http://www.whatsyourrq.org/ , and writes about taking the test and finding she's zero on the scale (and the average American scores a 4).

Wow.  Oh, yeah, sure -- of course, I'm going to go over there and take the test.  At the site, I'm told that its the first test of its kind, to let me and other Americans evaluate their readiness for all sorts of disasters -- they mention natural disasters and terrorist attacks -- as well as providing info on what I/we need to do ... to be ready.

(Lisa Scottoline is particularly funny answering the question, ready for what? Check out the essay "Disasterous" in the book. Page 191.)

Here's what I'm pondering:  how afraid are we Americans today?

We've got commercials about seeds for barter, we've got a great writer - humor and thriller - describing her experiences with a Readiness Quotient.

I don't want to be a lemming.  Neither do I want to be the proverbial frog who is placed in the pot of cold water and dies rather than jump out when the water heats to boiling.  What I do know: fear is a dangerous thing.  Clouds your thinking, monkeys with your response, all sorts of destructive things both individually and collectively arise from a spirit of fear.

I haven't finished pondering all this, but I thought I'd share this much with you today, Dear Reader.  Fear is a powerful, sneaky enemy of which we should all be aware.  Looks like it's here.