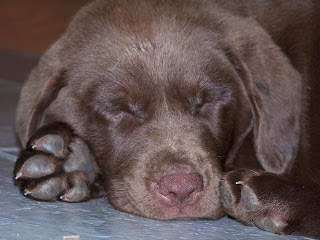 Driving down a busy street on Wednesday, I almost hit a puppy who was stuck mid-lanes, scared and not sure which way to run. In a bad decision, the pup darted to its right, and almost got hit by a big, white delivery truck. Thankfully, the truck screeched to a stop as I had done, and together, we blocked traffic on the road until the dog safety manuevered itself out of the street.

Pulling to the side of the road, the pup came right to me: a chocolate lab mix, with pretty green eyes, very friendly. Obviously someone's pet who had no street-smarts. This was a baby who was cared for: nails freshly clipped, clean, knows all about riding in a car. No tags, no collar. The dog knew some commands: sit, come.

So, I put the puppy in the back seat and took her to the nearby vet: no microchip. Brought the baby home, segregated the poor thing in a side courtyard (yes, I've done rescues before) and did the following:

1. Printed out signs "Found - Puppy" with my cellphone number and placed them at intersections near where I'd found the dog. (I learned in surfing the web that most dogs are found within a 2 mile radius of their home.) No personal info - the cellphone number, so far, isn't identifiable in some web listing. (Policeman-friend insisted on this anonimity.)

2. Called all vets in the surrounding area. There were four. (Lots of people, I learned, call vets to see if their dog has been brought in for care.)

At the Humane Society, you call at 8:30 each morning, to see if they have space. Sooner or later, you get in. Puppies and kittens get taken first - they have the biggest turnaround. (I would have to take the pup to the Humane Society, there was simply no way that our family -- especially my oldest dog, male and a Border Collie mix -- would be able to keep this adorable mutt.)

4. Placed an ad in the San Antonio Express-News -- they will run lost and found pet ads for three days, for free. Great community service.

5. Called several friends and found someone on stand-by to take the pup if the owner didn't appear.

And, voila! The next afternoon (after a noisy night of dogs barking and puppy crying - you know the scenario) the owner called.

What worked? The signs on the telephone poles at the street intersections. One of the owner's friends saw the sign, and called him.

Lesson I learned: Microchipping dogs can be a very good thing. The border collie I mentioned earlier doesn't have a chip, and I'm taking him in -- the Humane Society can do this for $25 and it takes less than a minute.

Sure, it may be painful for him: but that chip could get him back to me, if he ever got lost. I vote yes for microchipping your pet.
by Unknown 1 comment:
Email ThisBlogThis!Share to TwitterShare to FacebookShare to Pinterest
Labels: Dogs, Personal Post, Pet Tips
Newer Posts Older Posts Home
Subscribe to: Posts (Atom)