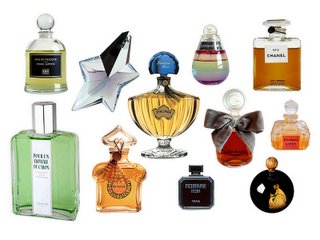 Those pretty, and empty, glass perfume bottles (as well as cool wine bottles, etc.) can have a new life providing light - clean them well, then fill with oil and a wick. Nice.

How to do this: use funnel to fill the clean glass bottle with lamp oil. Put the wick in the bottle, with the end of the wick placed into the oil. Let this sit for a bit (15 minutes is fine) and then light the top of the wick. Nylon wicks last lots longer than a standard candle wick - you can expect about 6 hours of light for each ounce of oil.

Cost? A 48 ounce bottle of ultra pure lamp oil (various colors are offered) sells for $8.99 at Lamplight Farms. Nylon wicks are of nominal cost at your local craft store.
by Unknown No comments:
Email ThisBlogThis!Share to TwitterShare to FacebookShare to Pinterest
Labels: housekeeping tips

Be Very Careful with Canned Tuna

During December 2005, the Chicago Tribune ran a series of stories dealing with the levels of mercury in canned tuna - and how that information was not being provided on the product labels. In particular, a type of tuna that carries a high amount of mercury is routinely included in your "chuck light" variety of tuna - a separate concern from the already established danger of albacore tuna. (The FDA suggests that you limit consumption of canned albacore to no more than 6 ounces per week for kids, and women who are or who may become pregnant.)

The complete Chicago Tribute series appears HERE, and while registration is required, it's free.

Some of the information that the Tribune provides:

The Symptoms of Mercury Poisoning -

For small children:
Subtle decreases in learning abilities
Delays in walking and talking
Decreases in attention or memory

Also from the Tribune:

"So is eating fish bad for me?

Not necessarily. Many fish species, such as salmon and sardines, provide Omega-3 fatty acids, which are good for the heart. But large, predator fish, such as swordfish and shark, should be eaten with caution because they generally contain the highest amounts of mercury."

Mercury is a metallic element (Hg) that occurs naturally in rock and soil, and is released into oceans by underwater volcanoes. It also is released into the environment from the burning of fossil fuels, including coal. Bacteria in water convert the metal into a toxic form known as methylmercury, which becomes more concentrated and dangerous as it moves up the food chain."

"How can I reduce my risk of mercury contamination?

Eat fish such as salmon that aren't predator fish, which accumulate mercury when they eat smaller fish. Small or short-lived seafood, such as shrimp, crab, scallops and tilapia, have the least mercury."

"Is there a safe place to buy fish?

No. Shopping at supermarkets, health food stores and gourmet fish shops is not safer. Because mercury is ubiquitous in the world's oceans---and once it gets into fish it cannot be removed---it likely does not matter who catches the seafood, processes it or sells it. There is no evidence that buying premium brands helps."