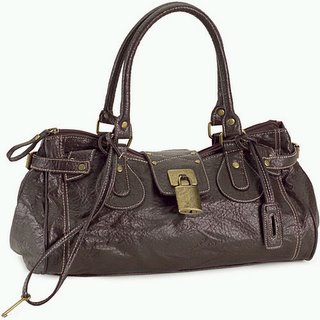 Target may be considered the frontrunner to "affordable fashion": Isaac Mizrahi and Mossimo have had lines at Target stores for awhile now. This has been so successful that Target is increasing its designer fashion by offering ninety-day windows of opportunity to scarf up clothing, accessories, and shoes by the likes of Luella Bartley and Sophie Albou (Paul & Joe) in its GO International Collection.

This fall, Target spotlights Behnaz Sarafpour. Sarafpour is known for feminine designs, including flowing dresses each priced in excess of $2000.00. Her Target collection will offer jackets for under $80.00.

Kohl's has a deal with Vera Wang for a line called "Very Vera." Payless has entered the race with Laura Poretzky’s Abaeté line, to be sold as the "Abaeté for Payless" shoe collection.

Walmart is doing things a bit differently. Walmart is offering its Metro7 line, which imitates existing fashion lines. It's being taken seriously enough that Walmart partnered with ELLE magazine to open this year's NYC Fashion Week with a Metro7 show in Times Square. Walmart also formed a distinct marketing campaign for this "cheap chic" line to entice a fashion-conscious clientele that would otherwise distain shopping at its stores.

Walmart appears to be succeeding. Reports Samantha Smith of England's News & Observer, "some of the best items in the collections were the handbags and shoes. Both were surprisingly good copies of the trendiest looks around. Most notable were the oversized, slouchy bags in black, tan and white with tassels and faux gold hardware, and the faux patent leather pumps and chunky cork heels that looked remarkably like those by Christian Louboutin."