How high is your grocery bill?  And are we paying lots more now than just a few years ago?  Seems like it to me.  And then I remembered my old personal survey that I did back as blog posts in January 2008 and again in March 2011.

So I decided to do it again.

And now, because my local grocery store offers online shopping you can double-check my tally if you like.  Or just compare what food costs us here in San Antonio as opposed to your super market. 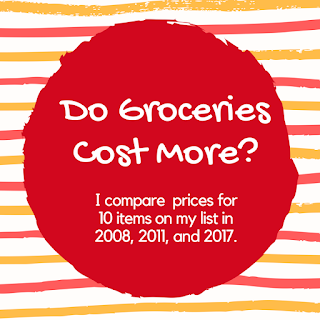 Here goes.  And again, this isn’t official statistical analysis.  Back in 2008, I ran to the store for a few things.  I used the receipt for that post.  And here we are.
.

Now, again, this isn’t a serious statistical analysis.  You can read formal research on food prices here.  I’m not delving into things like the “elasticity of food prices.”  Yawn.

I’m just comparing this stuff because I’m curious.  And food does cost more now than in 2008; or 2011, for that matter. Maybe not as big of a difference in the last six years, though.

And maybe there are other things going on.  For instance, I don’t by soy milk anymore.  Or deodorant that contains aluminum.  And I never buy beef.

It’s interesting and it’s something to ponder.  So I’m sharing this with you today, Dear Reader.

How do these prices compare with your neighborhood market?
.
by Unknown No comments:
Email ThisBlogThis!Share to TwitterShare to FacebookShare to Pinterest
Labels: Food Tips, Personal Post
Newer Posts Older Posts Home
Subscribe to: Posts (Atom)