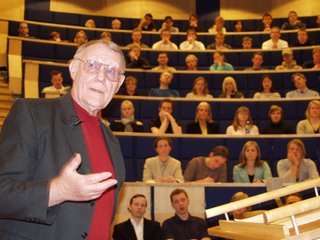 Forbes magazine keeps track of the rich, and lists the top four as: (1) Microsoft's Bill Gates; (2) money-man Warren Buffett; (3) industrialist Carlos Slim; and (4) IKEA founder Ingvar Kamprad. Kamprad's worth is about $28 billion, according to Forbes.

What Forbes doesn'f focus upon is that Ingvar Kamprad, 79, believes in frugal living. He drives a 15-year-old Volvo: "she is nearly new, just 15 years old, or something like that." He always flies economy class. His home is furnished with his own IKEA furniture. He takes public transportation to work. He asks that all employees write on both sides of the paper.

He also avoids wearing suits, and he likes to eat at inexpensive restaurants. Rumors exist that he replaces expensive Coca-Colas in the hotel mini-bar with cheapers ones from the convenience store before he checks out, to avoid the inflated mini-bar prices.

"People say I am cheap and I don't mind if they do," Kamprad told interviewer Darius Rochebin of the Swiss Broadcasting Corporation in a rare interview recently. His goal is to lead and inspire his employees, and to keep as much money circulating in IKEA as possible, so that its low-cost product can reach the most people world-wide. His goal is always to keep IKEA prices low.

Does he offer any advice? Kamprad recommends “Divide your life into 10-minute units, and sacrifice as few of them as possible in meaningless activity.”