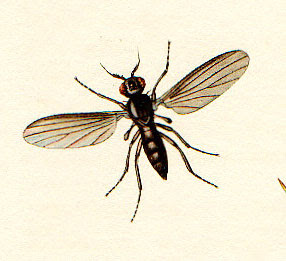 I have alley trash pick-up, but there has been some confusion lately about where to put the garbage during a temporary alley shut-down, allowing for pruning of the overhanging tree limbs, etc. By confusion, I mean that I put the trash bags in the wrong spot, and they didn't get picked up.

Which means the garbage had to set, developing its aroma and oozing its vile liquid, for another four days. You could almost hear the flies spreading the word. Feast. Fiesta. Major Party Time. The advance team was there within the hour.

So, I went online and discovered that in third world countries, they commonly hang open Ziploc bags filled with water near areas that flies are prone to visit, and somehow this keeps the flies away. The more modern version is reported to be placing CDROMs near the area. Something about the reflection off the water, or off the CDROM - flies don't like it.

Sounded silly, just too darn good to be true. But the volume of testimonials, from all over the world, swayed me. Plus, what's a CDROM hung up on the fence? Cheap, easy, right?

Well, it worked. The shiny CDROM kept all flies from the area. No kidding. And the trash reeked and oozed, a real big test of this folk remedy.

Since then, I've left the CDROM there, and placed one by the back door as well. Nary a fly -- I'm amazed at this one. Thought I'd share it with you.
by Unknown 3 comments:
Email ThisBlogThis!Share to TwitterShare to FacebookShare to Pinterest
Labels: Advice, Flies, housekeeping tips, Personal Post
Newer Posts Older Posts Home
Subscribe to: Posts (Atom)