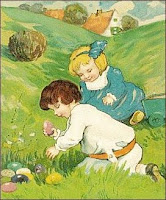 There's lots of ways to get pretty colors on those Easter Eggs without using the artificial dyes that are being sold everywhere right now.  Not only does this use stuff you already have on hand, but there's none of those nasty chemicals aka "artificial colors" to soak into your egg.

Now, be forewarded, when I did this, my eggs did turn out with colors that weren't as intense as the box-dye produces.  More pastel?  Faint? Pale?  Not sure the word to use, but you get the idea.  I thought they were just fine, especially since they are natural and organic.  I did use white eggs, not brown, maybe that made a difference, I dunno.  And, the longer you let them hang in the dye liquid, the darker they get, so the shade of my eggs may hint about the extent of my patience ....

Here's what I did to create some basic dyes for eggs that I found work well, I'm sure you can think of even more, Dear Reader!  Now, my All-Natural Easter Egg Dye Experience:

First things first, this assumes that you've hard-boiled your eggs in vinegar water (at least 1 Tablespoon in your boiling pot, more won't hurt).  And after you've left them cool, you've checked your Egg Batch for cracks and pulled those out to eat as a snack, put into a salad, whatever.  (The vinegar water won't make them taste funny, of course.  It's in the water to help make the eggshells amenable to taking color.)

Okay, now get yourself ready for coloring your eggs the natural way.  Your going to be using stuff that will change the color of the eggshell and this means it will also change the color of your tablecloth, placemat, HAND, etc. so prepare your work station carefully.

Now, for the tools you'll need.  I bought some throwaway plastic bowls (not very eco-friendly or frugal, mea culpa) to hold the dye and the eggs so I could just toss them later.  If I'd thought ahead, I would have saved some containers for this -- like the bottom halves of soymilk cartons, things like that.  Anything that can handle the heat of boiling water and the task of setting there for up to an hour with some eggs in it.  I also used an old strainer that I never need during the week - one of those littler ones that may have been for loose tea in a tea pot.  And a wooden cutting board (it did get stained by this process a bit), as well as a knife, a metal spoon, a ladle, and the big boiling pot, of course.

I made four colors.  I left the eggs in the dye for around an hour, till they had the color I wanted.  Doing this in rounds did take some time, but that's why God made laundry, dust, etc. Also, I used some of the white vinegar from my humungous White Vinegar bottle that I got at Sam's Club -- cuz I use white vinegar all the time in housecleaning, and I didn't know how the Apple Cider Vinegar would work here since it has the mother in it, and those little granules might mess with the surface of the eggshell during dying ....

I used blueberries.  I took a bag of frozen blueberries, thawed that sucker, and then pluverized them into a pulp. Then I added a T of vinegar to them, mushed some more.  Finally, I strained them into one of my little plastic bowls, ladled some boiling water into them, and carefully lowered a couple of boiled eggs into the bowl with my metal spoon.

I used canned beets.  1 whole can.  Same procedure as above.

I used tumeric. I got the spice awhile back at Central Market, and quickly discovered it liked to try and turn everything it touched yellow so I figured why not let it go crazy with some eggs, right?  Here, I didn't need to pulverize anything.  I just took a heaping tablespoon or FOUR and put that into the bowl and made sure it was fully dissolved in the boiling water -- and I added some vinegar in here, too.  Maybe a tablespoon.  I know I added the vinegar to the egg water, but I put some in the dye water, too, "just cuz" as my cousin MaryBeth used to say.

I used coffee.  Old coffee from the coffee pot.  Touch of vinegar.  Boiling hot.  Actually, the eggs came out a little beige, or khaki, but they looked nice in the basket once they were done.

I mixed the blue dye and the yellow dye until I got a shade I liked.

Dip an egg you've dyed yellow into the bowl of beet dye till it turns the shade of orange you desire.  Actually, you're dipping yellow into pink because the beets don't really make a dark red color.  But, heck, roaming thru the pantry, fridge, and freezer, I couldn't figure out a source for red, and I got something in the orange-family when I did this, so go figure.  If you, Dear Reader, discover a natural source of deep red, I'd love to know.


Whew!  Now, I just made my eggs solid colors, nothing fancy.  However, you could wrap your eggs with rubber bands before dunking them in the dye bowl and then take the band off after the egg had dried, for a nice effect.  Stickers, same idea.  And of course, after they're done you and the kiddos can decorate them all sorts of ways.