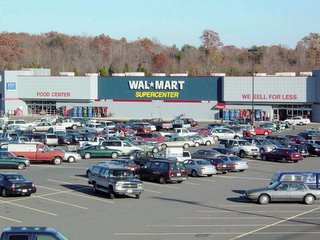 WalMart: the High Cost of Low Pricing can be seen, for free, via Google Video. Just click and watch: it's 1.5 hours long.

This movie is actually a documentary made by Robert Greenwald which has been shown nationwide by various non-profit groups. It's controversial.

Dr. Joseph Mercola recommends taking the time to watch it:

"It might take awhile to watch it, but I can strongly assure that it will be time far better invested than watching most anything on commercial TV.

"While many consider Wal-Mart a bargain, Penn State University researchers estimate some 20,000 American families have dropped below the poverty level due to the astounding growth of Wal-Mart between 1987 and 1998. What's more, in counties where Wal-Mart stores are located, more than 15 percent of families depend on food stamps, compared to the national norm of 8 percent. The true costs of Wal-Mart aren't worth the apparent savings."

Not everyone believes the film is accurate. Here is Brit Hume's take on things: a transcript of his November 2005 Special Report.