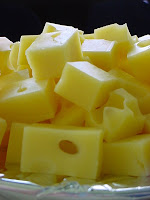 You know that they serve cheese sauce in Heaven.

You can pour this stuff over pasta, veggies, sliced chicken breast, biscuits ... heck, I've seen this stuff slurped up with a spoon out of the pot, but I'm not recommending this as a soup (although if you added a bit more liquid to it ... hmmmm)....

Anyway, here's my Super Easy Cheese Sauce Recipe.  Hopefully, you've got what you need in your pantry already for this.

1.  Melt 3T butter in a pot over medium heat.  Stir in the same amount of flour, 3 tablespoons, and throw in your seasoning.  Salt, pepper (say 1/2 teaspoon each).  If you're like me, you like some punch, so last week, I just shook in a nice bit of Montreal Steak Seasoning (because I love this stuff), and it turned out great.

Take the pot OFF THE HEAT while you're stirring this all together.  Make sure it's a thin goop.  No lumps.  Consistency should be similar to lemon curd.  (Now, this is why one of the reasons that I like a gas stove.  You just turn the knob, no more heat.  If you've got an electric stove, that won't work; you have to move your pot to another burner b/c the electric coil still gives off heat for a bit after you've turned it off.)

2.  Now, after you've proudly combined your butter and flour, turn the heat back on under the pot, a low to medium heat now, and slowly add in 1.5 cups of milk.  Pour out a quarter in at a time.  Stir, stir, stir.  Make sure your butter/flour stuff has accepted all the milk before you add more to the pot.

3.  Okey dokey.  Now that you have your milk combined with the butter/flour sludge, you have to let the heat do its miraculous chemical altering trick.  Stir, stir, stir while this pot is over low heat.

Does this mean that you can't leave the pot to put the measuring cup in the sink, or the milk back in the fridge?  No.  Does this mean you can't go watch TV?  Yes.  Movement is important here, as is the low heat.  If you feel a film forming on the bottom of the pan, your heat's too high.

Stiring is boring to you?  It's not going to take that long, get a grip!  Hum a tune, decide whether or not Rhett ever went back to Scarlett, pretend you're doing your own Food Network show and talk to the imaginary camera.  Just keep stirring.

Before you know it, this stuff will be thick.  If you stopped now, you'd have white sauce.  But that's not what we're aiming for here, so throw in at least 1 cup of grated cheese.  If you don't want to grate the cheese, then cut it into small, small chunks.  Little squares that expose lots of surface area, so the cheese will melt quickly in the pot.

And that one cup of cheese is debatable, too.  Me, I throw in more -- how much more depends on what I've got on hand.  A little less than one cup?  That's okay, too.  Hey, if you've got two kinds of cheese in the fridge, combine them -- as long as their flavors don't clash for you.  Keep stirring until the cheese is melted, and the sauce looks like you want it to look.  Smooth, thick, decadent.

What kind of cheese should you use?  Something with lots of punch, no subtle cheeses here.  Sharp Cheddar is good, for example.   Blue cheese can be mouth-watering:  I've made this stuff with blue cheese and thrown it over some steak, and it was to die for.  Just remember, you want to grate your own cheese - none of that bagged stuff, because of the additives they use to keep the cheese from clumping.

There you have it.  Maybe this isn't the stuff of fancy French chefs, but it works for me - and I like it because I monkey around with this based on what I have in the house, and it always turns out so, so tasty.

Plus it's easy - and yet, most folk think a cheese sauce is so, so hard to do.  Well, I won't tell them if you won't.
by Unknown No comments:
Email ThisBlogThis!Share to TwitterShare to FacebookShare to Pinterest
Labels: recipes
Newer Posts Older Posts Home
Subscribe to: Posts (Atom)