Vegetables: Fresh or Frozen or Canned 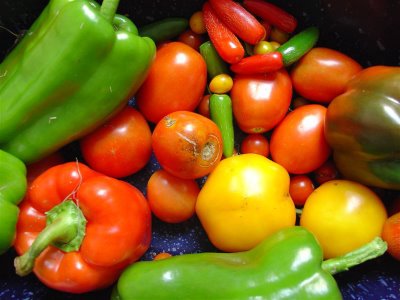 Which form of vegetables is best for you and yours? Fresh is considered best, of course: however, those fresh veggies lose a lot of their nutritional value if you boil them in water for long. Better to steam them.

It's all about the nutrients. Both Vitamin C and folic acid escape quickly: in raw vegetables, both will start vanishing after only a few days.

Research has found that canned apricots, spinach, and pumpkin provided more vitamin A per serving than those cooked while fresh. Canned asparagus, potatoes, and spinach also proved to outrank or equal fresh-cooked for vitamin C. However, freshly cooked tomatoes had higher vitamin C and fresh carrots, more vitamin A, than either canned or frozen.

The researchers explain that processed (canned and frozen) veggies can be nutritionally superior to fresh produce because the processed ones are chosen at optimal harvest, when nutrient content is at its peak. This is very important for finding vitamin C in green veggies.

Since processing seeks to maximize nutritional content, the debate becomes: frozen or canned?

Both are preserved when the vegetables are at their nutritional best, at the peak of their harvest. Canned vegetables do have a salt problem, unless you check the label and buy a "no-sodium" or "lo-sodium" variety. (Canned fruits, likewise, have that sugar issue.)

What's the difference? It's in the preparation...

Canned: cans (or glass jars), machine-filled with vegetables, as well as brine or liquid, are pre-heated and then automatically sealed. Then, they are cooked under standardized times and temperatures, assuring the veggies will store without refrigeration. Once cooled, they stay in warehouses until they reach the store shelf. You need only re-heat.

Frozen: Freshly harvested veggies are first slightly pre-cooked to keep their natural appearance and flavor during the long time they'll be stored. Otherwise, they'd brown. Then, they're placed into polyethylene bags or fiber cartons which are wrapped in marketing labels (veggie name, company logo, etc.) and placed in freezers. They still need some cooking time.

If you buy vegetables in a can, make sure that the can isn't leaking or buckling anywhere. Swells mean spoiled. A little dent is okay.

As for vegetables from the freezer, their packages should be solid. Any package that's wet or weak means it's defrosting -- and any package that has a stain on the outside or that has an icy crust means the package was defrosted and refrozen. Doesn't mean they're toxic, but it does mean some taste has been lost. Choose something else.

Store your canned veggies at a temperature no higher than 75°F., and they'll keep for at least a year. Even after a couple of years, they'll still be safe to eat, but some taste will be lost. Open a can, put any unused portion in the fridge: they'll stay good for a couple of days. Frozen veggies need to be kept at 0°F. or lower. Open a package, put the remainder back on ice asap. If it defrosts, use it now.

Bottom line: Between the two processing options - frozen or canned - it apparently comes down to taste as a general rule. I like frozen peas better than canned, for example. Fresh remains the optimal choice: which means those Spring-time Farmer's Markets can't open a moment too soon.